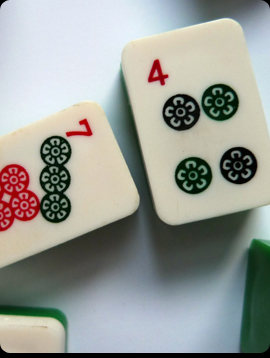 Mah Jongg (or Maahj, as it is often called) is a fascinating, rummy-like game played with tiles rather than cards. The game originated in China but its exact origins are shrouded in story and myth. Some claim it was the game of Chinese royalty, played in secret to keep the knowledge to themselves. Others claim it was invented by a Chinese General to amuse his troops during long months of battle. More recent investigations point to early versions of this popular tile game appearing as recently as 150 years ago in China as a variant of card games. Whichever story you choose, there is general agreement that the game we play and love originated in China, and popularized in the United States by Joseph Babcock at the beginning of the 20th century.

There are several versions of Maajh, but each fall under two broad categories: American Mah Jongg and Chinese Mah Jongg. American Maajh differs from International Maajh in several ways:

Mah Jongg is enjoying a resurgence in popularity, with millions of dedicated players around the world and a variety of Internet and computer versions. A very small amount of time and effort is required to become familiar with the elementary principles of the game.Your patience in mastering the fine points of Mah Jongg will be repaid many times by the keen enjoyment invariably derived from the game.

For information on how to use the League's services, visit the Services Page.