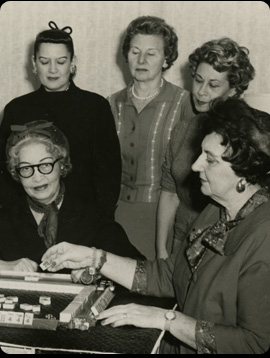 When this ancient game was introduced in the USA in 1920, the best of both games was incorporated into this occidental version. Received enthusiastically by the American public, this game was also embraced by game players throughout Europe. Many felt the game would be improved and simplified by adding new combinations of tiles and eliminating some of the old combinations. It wasn't long before every group had its own combinations, leading to a fair amount of confusion in the game-playing community.

In 1937, a number of Mah Jongg enthusiasts met in New York City to standardize the game so that all Mah Jongg players would play the same hands and rules-it was at this meeting that the National Mah Jongg League was founded. Each year the League changes the hands and rules to add more excitement to the game.

For more than 75 years, the National Mah Jongg League has been the arbitrator for everything that relates to American Maajh. The League started with 32 members and today numbers over 350,000.

For information on how to use the League's services, visit the Services Page.